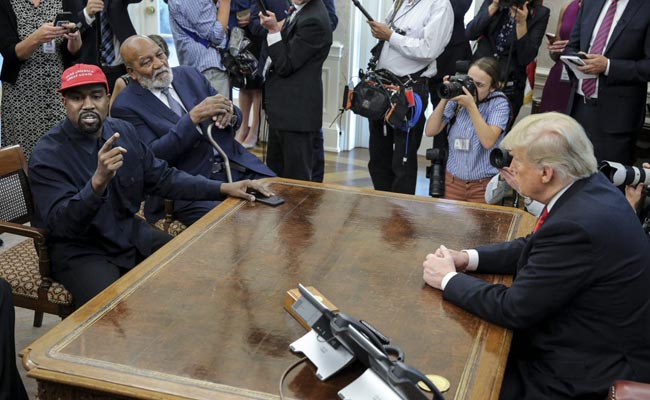 File Photo of Kanye West with Donald Trump in 2018. (AFP)

Former US President Donald Trump has slammed rapper Kanye West after controversy over a dinner they had at Mar-a-Lago resort. The event, meant to be a private affair, soon snowballed into a controversy, prompting an avalanche of criticism from some Republican rivals as well as allies. Mr Trump said on his Truth Social platform on Saturday that he met West, who has legally changed his name to Ye, in order to “help” him as he has been “decimated in his business and virtually everything else”, according to a report in Rolling Stone. The former president also called West “a seriously troubled man, who happens to be black,” according to the outlet.

West has seen his fortune tumble as a number of brands ended partnership with the disgraced rapper’s anti-semitic remarks.

Mr Trump further fumed that West requested a meeting “alone”, but showed up with three people. One of them was Nick Fuentes, famous for his anti-semitic views, said Rolling Stone.

Mr Trump said he didn’t know two of those men, including Fuentes. But Ye claimed in a video that Mr Trump was impressed by Fuentes.

In the same video, he reportedly suggested to the former President to become his running mate during 2024 presidential run.

But this angered Mr Trump who directed his fury at the rapper. “He tried to f*** me. He’s crazy. He can’t beat me,” said Mr Trump, according to NBC News which spoke to one of his confidants.

On Truth Social, he wrote, “I told him don’t run for office, a total waste of time, can’t win.”

In damage control, Mr Trump’s campaign managers have now instituted new vetting procedures and gatekeeping efforts as details emerge about how Fuentes and the former president found themselves at the same table, according to NBC News.

As Gujarat Votes, A Special Booth For India’s “Mini-African Village”