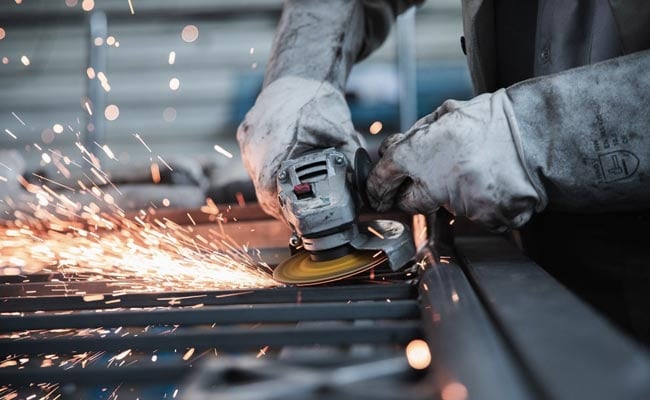 Input cost inflation receded to the joint-weakest rate in 28 months.(Representational)

Manufacturing activities in India touched a three-month high in November as new orders and exports expanded boosted by demand resilience and substantial easing of cost pressure, according to a monthly survey released on today.

The seasonally adjusted S&P Global India Manufacturing Purchasing Managers’ Index (PMI) stood at 55.7 in November, up from 55.3 in October, signalling the strongest improvement in operating conditions in three months.

The November PMI data pointed to an improvement in overall operating conditions for the 17th straight month. In PMI parlance, a print above 50 means expansion while a score below 50 indicates contraction.

Moreover, firms were strongly confident towards growth prospects, with optimism driving another round of job creation and restocking initiatives.

Buying levels expanded at a marked and accelerated rate as firms also sought to benefit from relatively mild price pressures.

“Survey participants were also strongly confident in both the buoyancy of demand for their goods and their ability to further lift production in 2023. The level of positive sentiment recorded in November was the best in nearly eight years,” Lima said.

On the prices front, input cost inflation receded to the joint-weakest rate in 28 months, while charges rose at the slowest pace since February.

“Companies were also aided by a substantial cooling of cost pressures in November, a factor that prompted them to purchase more inputs and add to their inventories.

“The overall rate of input cost inflation slipped to the joint-lowest in 28 months. Buyers of Indian manufactured goods likewise gained from this retreat in cost inflation, as 92 per cent of surveyed firms left their selling prices unchanged from October,” Lima said.

On the jobs front, the survey said that employment rose solidly, and for the ninth month in a row.

The S&P Global India Manufacturing PMI is compiled by S&P Global from responses to questionnaires sent to purchasing managers in a panel of around 400 manufacturers. The panel is stratified by detailed sector and company workforce size, based on contributions to GDP.

India To Strengthen Ties With US With Greater Vigour: Nirmala Sitharaman

Indian Banking System Won’t Be Affected By Case Like This

Now, Travellers From These Countries Can Make UPI Payments In India