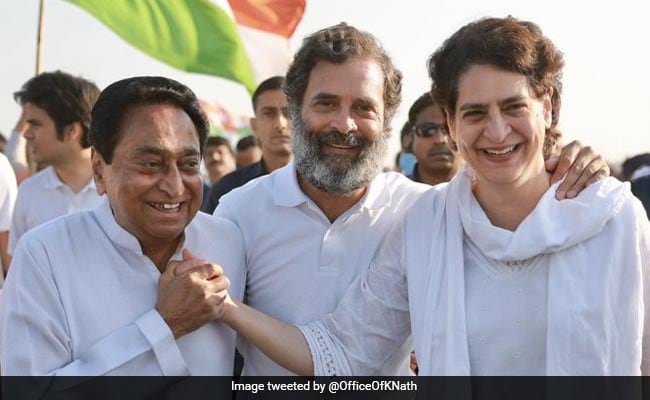 Former Madhya Pradesh Chief Minister Kamal Nath’s heart-to-heart with a religious figure has made his party, the Congress, the subject of much ridicule in the state. In the video of the chat with “Katha Vachak (religious preacher)” Pradeep Mishra — which is being widely circulated — the 76-year-old leader is seen complaining about the tough schedule set by Rahul Gandhi’s Bharat Jodo Yatra, which is currently passing through Madhya Pradesh.

He goes on to add that Mr Gandhi had three pre-conditions for the Yatra’s Madhya Pradesh leg. The list included travelling to tribal icon Tantya Bhil’s birthplace, visiting the Omkareshwar Temple and Mahakal Temple.

All of it have been ticked off the list. Mr Nath was seen accompanying Mr Gandhi everywhere — from Omkareshwar to the sanctorum sanctorum of Ujjain’s Mahakaal temple.

In his frequent interactions with the people, Mr Gandhi has been lauded much for his physical fitness. Not only is he setting the pace for this march, he is also seen climbing tall water tanks and doing push-ups on the road, often with elderly party leaders in tow. In the Karnataka leg, it was Siddaramaiah, who kept pace with Mr Gandhi on a short jog.

Senior Congress leader even stumbled and fell during the walk in Khargone district. The Congress blamed it on the condition of the roads of the state, igniting a verbal tussle with the BJP.

Mr Nath’s video has drawn a sharp comment from the BJP’s Narottam Mishra.

“Kamal Nath ji, I have seen your video and can feel your pain,” the state Home Minister said

“Also, Rahul Gandhi is making you add three places to the Yatra. Your pain is obvious and your words are also exposing his (Rahul Gandhi’s) hypocrisy on religion and tribals… I pray that Rahul Gandhi does not force those who are physically ill to walk in the Yatra, as it will make such people talk even about dying. Please ensure that your event doesn’t become harmful to anyone,” Mr Mishra added.

Gujarat Votes: Ground Report From The Heart Of Saurashtra