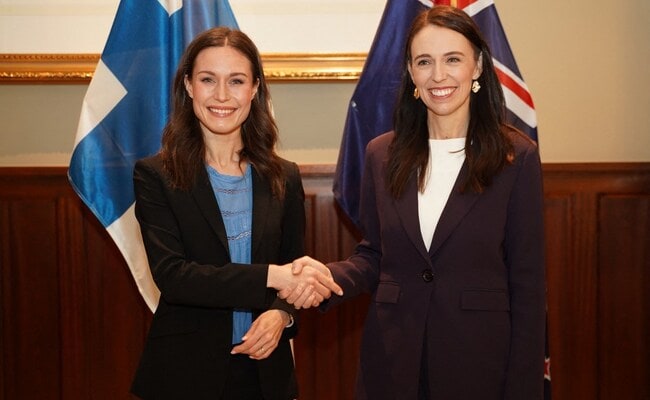 It’s the first time a Finnish prime minister visited the prime minister of New Zealand, and the most viral moment of the trip has been their answers to a question at a press conference about their ages. Jacinda Ardern, who has led New Zealand since 2017, hosted Sanna Marin, Finland’s leader since 2019, in Auckland on Wednesday.

Watch NZ Prime Minister Jacinda Ardern pick apart this reporter’s question during a joint press conference with Finnish PM Sanna Marin. He asked the pair ‘are you two meeting because you’re similar in age and got a lot of common stuff there?’
Read more: https://t.co/eTtJEqJoFZpic.twitter.com/UBEZs1kzvF

In a joint statement, the Prime Ministers said they discussed Ukrainian sovereignty, the climate crisis, and their concerns for women and girls in Iran. So they were taken aback when a reporter at a joint press conference suggested they were meeting because they were both young women.

“We, of course, have a higher proportion of men in politics, it’s reality,” Ardern said. “Because two women meet, it’s not simply because of their gender.”

The reporter from New Zealand talk-radio station Newstalk ZB asked the two leaders, “A lot of people will be wondering, are you two meeting just because you’re similar in age and have got a lot of common stuff there – when you got into politics and stuff – or can Kiwis actually expect to see more deals between our two countries down the line.”

A representative for Newstalk ZB didn’t immediately respond to a request for comment.

In a video clip that has since been viewed over 1.5 million times on Twitter, Ardern replied first. “My first question is, ‘I wonder whether or not anyone ever asked Barack Obama and John Key if they met because they were of similar age,'” she said.

Key, the former prime minister of New Zealand, met with former US President Barack Obama several times when the two were in office. They have been seen golfing together at least once since leaving their posts.

Ardern, 42, and Marin, 37, both highlighted existing and potential partnerships between the two countries as the core reason for their meeting. Marin described a special interest in diversifying Finland’s technological resources, while Ardern cited the “huge potential” in each country’s respective exports.

Ardern said she hoped the meeting would help both countries leverage economic opportunities.

“Little would be known about the depth of that relationship or the potential of it,” she said “But it’s our job to further it, regardless of our gender.”