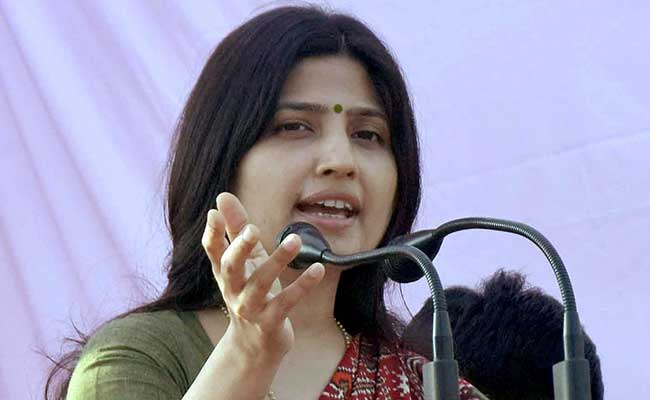 Samajwadi Party leader Dimple Yadav, who will contest tomorrow’s Lok Sabha election in Uttar Pradesh’s Mainpuri, has alleged hundreds of BJP leaders and workers are distributing cash and liquor at the constituency.

Ms Yadav, the wife of former UP Chief Minister Akhilesh Yadav, in a tweet tagged the Election Commission of India and sought action.

“Hundreds of BJP leaders and workers have gathered at Hotel Palm, Station Road, Mainpuri and are continuously distributing liquor and money. Election Commission should take cognisance of the matter,” Ms Dimple tweeted in Hindi.

A Samajwadi Party delegation will meet the Election Commission tonight with a complaint, sources have said. Samajwadi Party MLAs are likely to sit on a dharna against what they called the BJP’s illegal activity 24 hours before voting begins.

Apart from the Mainpuri by-election necessitated by the death of Samajwadi Party founder Mulayam Singh Yadav, voting will be held in two assembly seats in UP – Rampur Sadar and Khatauli.

In Uttar Pradesh, a direct contest between the BJP and the Samajwadi Party-Rashtriya Lok Dal (RLD) alliance is on the cards in bypolls to the Rampur Sadar and Khatauli assembly seats and the Mainpuri Lok Sabha constituency.

The Bahujan Samaj Party and the Congress are not contesting.

In Rampur Sadar and Khatauli, the elections were necessitated after Samajwadi Party MLA Azam Khan and BJP MLA Vikram Singh Saini were disqualified following their conviction in separate cases.

While Chief Minister Yogi Adityanath is hoping to demolish the key Samajwadi Party citadels after wresting Azamgarh and Rampur Lok Sabha seats in June bypolls, the Samajwadi Party is keen to turn the tide with the recent public show of unity by Akhilesh Yadav and his uncle Shivpal Yadav, who announced they have bridged their differences.

Trouble For Many Delhi Voters, Names Missing From Polling List