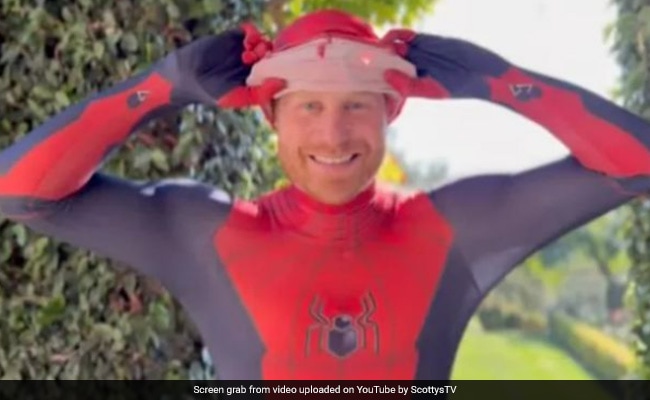 Prince Harry, the Duke of Sussex, recently dressed up as Spider-Man in a surprise video message to try to comfort bereaved military children, whose parents died while serving in the British Armed Forces. The special message was played to members of Scotty’s Little Soldiers at their annual Christmas party. In the minute-long clip, Harry, dressed as Spider-Man, gave instructions to the children, who were told to defeat five villains who were trying to ruin Christmas.

According to Scotty’s Little Soldiers, their party’s theme this year was “Heroes and Villains,” which is why Harry was dressed up as a superhero.

Dressed in Spiderman’s red and blue, web-patterned costume, Harry says in the video, “Hey, Scotty’s Little Soldiers. Welcome to the Christmas party. I hope you got some rest before tonight’s excitement. I hear from Sharky and George [that] there are five villains and you guys need to stop them from ruining Christmas. So, use your teamwork, your brains, and your brawn to make sure you do exactly that. Find them and don’t let them ruin Christmas!”

In a heartfelt message, he then goes on to say, “Christmas is a time when we miss our loved ones really, really badly and that’s OK. But at the same time, it can be possible to feel guilty for having fun without our parents. But I am here to assure you that our parents always want us to have fun, OK? So don’t feel guilty. You are allowed to have the best time ever, especially with this Scotty’s Little Soldiers community. Go out there, have the best time, and Merry Christmas.”

He only lifted his mask to reveal his true identity at the end of the message, and then whispered, “Merry Christmas, ” leaving the children pleasantly surprised.

One of the children, Emily Reynolds, 12, who was only seven when her father died told The Guardian, “It’s cool that someone who’s been through the same experience as us is thinking about us. He’s not just someone who’s trying to be sympathetic, he actually knows what it’s like to grow up without your parent. My friends think it’s really cool that I get letters and messages from Prince Harry.”

On the occasion, Scotty’s Little Soldiers Founder, Nikki Scott, said: “It’s incredible for everyone at Scotty’s to have Prince Harry’s continued support. He knows what it’s like to grow up without a parent and understands there are certain times of the year that can be particularly challenging. Christmas is one of those times. We love the fact that Prince Harry not only recorded such a special message but also dressed up as Spider-Man.”