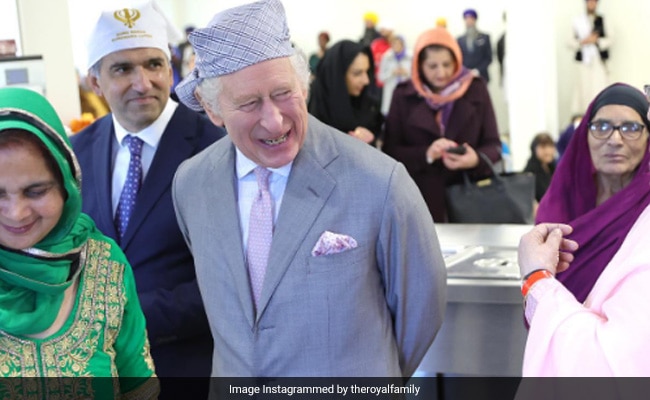 Britain’s King Charles III on Tuesday inaugurated a new gurdwara in Luton, England, on his first trip to Bedfordshire, and had a wholesome interaction with community leaders, volunteers, and students. The 74-year-old monarch was welcomed with a rousing rendition of ”Bole so Nihal” – the Sikh slogan. At the gurdwara, he was greeted by Indian-origin Professor Gurch Randhawa, member of the local Sikh congregation and Director of the Institute for Health Research at the University of Bedfordshire, BBC reported.

Respecting Sikh traditions, King Charles covered his head with a kerchief, offered his prayers, and sat on the floor with Sikh devotees in the prayer hall.

When you come to the Gurdwara, all the worldly titles are left at the door. Whether a King or homeless..you are all treated the same, equally, as human beings first. 🧡🙏🏾 pic.twitter.com/zU7Pgbg1b1

He also visited the community kitchen and interacted with the volunteer women who were preparing rotis for the devotees. He was even seen making the traditional ”namaste” gesture while happily greeting the volunteers and members of the gurdwara. King Charles also met children who are learning Punjabi and traditional music.

The pictures and videos of the King’s visit were shared on the official Instagram page of the Royal family. The caption read, “At the newly built Guru Nanak Gurdwara, His Majesty met volunteers who run the Luton Sikh Soup Kitchen Stand. The kitchen provides vegetarian hot meals 7 days a week, 365 days a year at the Gurdwara.”

It further read, “During the pandemic, the Gurdwara also ran a pop-up Covid vaccine clinic, which was one of the first of its kind in the UK. The Gurdwara encouraged other places of worship to tackle misinformation regarding vaccine hesitancy.”

The building work for the new gurdwara commenced in 2020 and is described as an impressive 37 by 32 meters wide, three storeys high construction, built with the support of local donations. The gurdwara langar serves around 500 meals a day and the local community also runs the Luton Sikh Soup Kitchen every Sunday outside the Town Hall, serving around 150 meals.