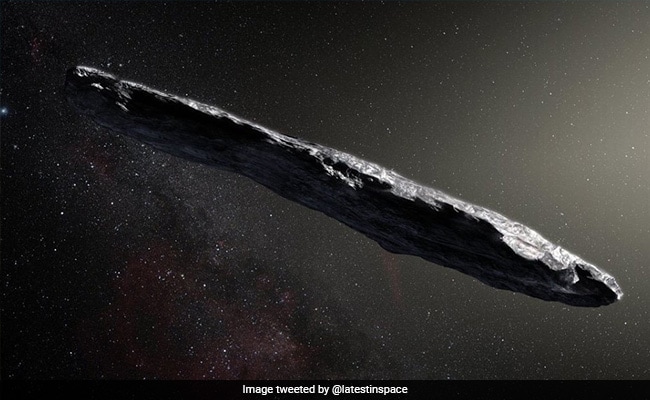 It won’t completely be out in interstellar space for another 2 years.

‘Oumuamua’ – an interstellar object that crashed through our solar system five years ago has always been a source of enigma and fascination for scientists and astronomers around the world. The elusive object made headlines as a suspected alien probe, an exploit from a different galaxy, or just a mere rock, triggering many theories and speculations. The intriguing object is back in the limelight as a new report suggests that it is now on its way out of the outer Solar System.

A report by Space Explored says that the object is currently cruising just past Pluto, covering a distance of over 2,832,000 miles (4,557,662 km) every 24 hours. It won’t completely be out in interstellar space for another 2 years.

It all started on October 19, 2017, when Robert Weryk, an astronomer at the University of Hawaii at Manoa, spotted an intriguing new object with the Panoramic Survey Telescope and Rapid Response System (Pan-STARRS1) in Hawaii. It was dubbed ‘Oumuamua, which means “scout” in Hawaiian. ‘Oumuamua’s speed and trajectory revealed it originated outside the solar system, making it the first known interstellar object. While analyzing the images, researchers noticed that although ‘Oumuamua’ was around 230 metres long, its thickness was only around 40 metres – giving it a bizarre, cigar-like shape.

When it was first spotted, many researchers including Harvard University’s Avi Loeb posited that the object was an alien spaceship. Others suggested that it was an asteroid or a comet. In March 2021, research suggested that it is a fragment of a Pluto-like planet from another solar system, according to a CNN report. These findings may shed light on the stuff a new class of planet, an exo-Pluto, is made of, scientists added.

Some researchers believed that about half a billion years ago, Oumuamua’s parent planet was hit by an object, which sent it hurling toward our solar system. They added that this piece of the planet must have entered our solar system in 1995, which we likely missed. Over time, it lost 95 percent of its mass and became its current size.

However, to date, the mystery is still unresolved, and with not much data to work upon, the origins of the cosmic visitor are unknown. The second interstellar object discovered in our solar system was an interstellar comet, 2I/Borisov, observed in 2019.