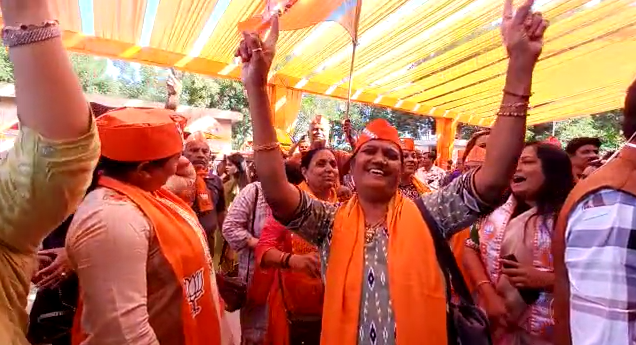 In the BJP’s record victory in Gujarat today, Muslim-dominated constituencies played a part even though the party did not field a single Muslim.

In many Muslim-dominated seats in Gujarat, the ruling party appeared to be winning at the cost of the Congress.

The BJP led in 12 of 17 seats with a high Muslim population – an increase of six seats — compared to just five for the Congress.

Historically, most of these seats have voted Congress.

For example, Dariapur, a Muslim-dominated seat that the Congress held for 10 years. Congress MLA Gyasuddin Shaikh lost to the BJP Candidate, Kausik Jain.

The Aam Aadmi Party (AAP) has failed to register in any of the 16 Muslim-dominated seats it contested in. However, the 10-year-old party, along with Asaduddin Owaisi’s AIMIM, had a big role in splitting the votes that traditionally go the Congress.

AIMIM has 13 candidates, including two non-Muslims, that ate into Congress votes in Muslim-dominated seats like Jamalpur-Khadia and Vadgam.

Congress’s Imran Khedawala was losing in Jamalpur-Khadia. In Vadgam, Jignesh Mevani was trailing by a small margin.

The Congress, playing to the Muslim voters who support it in Gujarat, had fiercely protested the early release of 11 convicts in the Bilkis Bano case.

The convicts were freed on August 15, Independence Day, by the Gujarat government under an outdated policy. The move sparked massive nationwide outrage, which was amplified by images of the rapists being garlanded and welcomed like heroes by a Hindu organisation.

Chandrasinh Raulji, the BJP leader who was involved in the decision to release the rapists and had described them as “Sanskari Brahmins”, is winning in Godhra. He is a six-time MLA from the constituency.