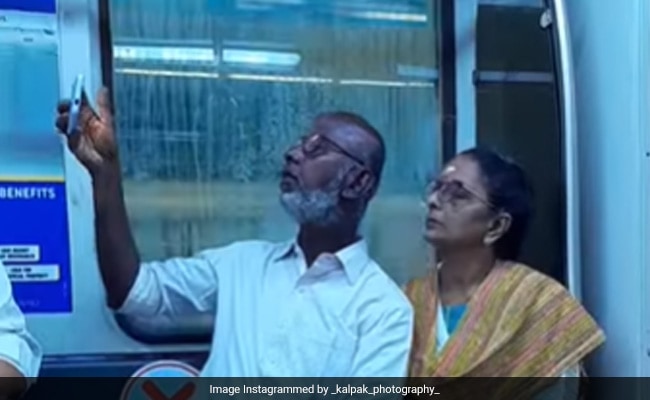 The clip has amassed over four million views and over six lakh likes.

Internet is full of posts on elderly couples. Some of them make us believe in true love and the concept of soulmates. In one such similar video, a elderly couple is seen struggling to take a selfie in a metro. Their efforts and the cuteness in the video is winning the hearts of many on the internet.

The video was shared on social media by a user Kalpak, who was also travelling in the same Metro. In the video, the duo attempts to take a picture but fails. The woman assures her husband that they will be able to take a decent picture before they deboard. The man keeps trying but to no avail. In a few minutes, just before they reach their destination, they stand up and get their perfect picture. The video was shot in Kolkata.

“Wait for the good picture. Life just gets a little better with the right person, isn’t it?” the caption reads.

The video was shared on November 21 and since being shared, it has amassed over four million views and over six lakh likes. Many people left heart emojis on the Instagram video.

“These two people are both doctors. The lady is my school friend….. a very close friend who I Jane been friends with for over 40 years….. thanks for capturing this!!!!!!” said a user.

A second person said, “This is sadly the last generation who were innocent & struggled to deal with technologies…  Innocent & pure”

“Aw!! This is so beautiful!!” commented another user.

One user, who was an acquaintance of the couple, commented, “On behalf of the couple in the picture as well as myself, thank you. They are a Chennai-based scientist and doctor couple and were visiting Kolkata. They took the metro to visit my family, and we were meeting after 45 years of being classmates. The photographer deserves a big embrace; you have beautifully captured this sentimental journey and the moments for us to treasure for years to come. We wish you success in all of your artistic endeavours.”

Why Are The Municipal Corporation Of Delhi (MCD) Elections Important?