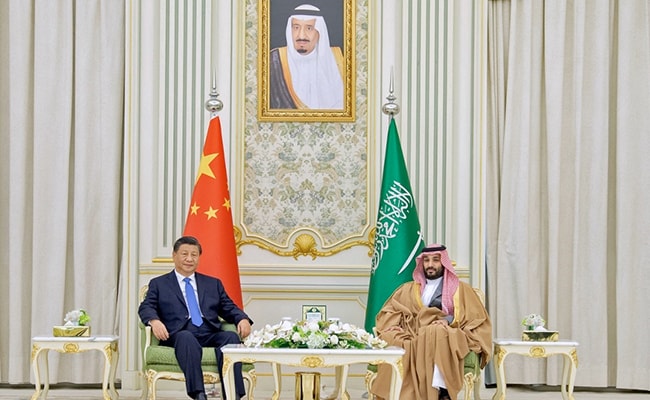 In July 2004, China and the GCC announced the launch of negotiations for a free-trade agreement.

Arab Gulf countries, strategic partners of Washington, are bolstering ties with China as part of an eastward turn that involves diversifying their fossil fuel-heavy economies.

As a Gulf-China summit takes place in Riyadh on Friday, AFP examines key areas of economic cooperation between the six-member Gulf Cooperation Council and the world’s second-largest economy.

By 2020, China had risen to become a primary trading partner with the GCC states, especially in the field of energy.

China imports hydrocarbons from Oman, the United Arab Emirates, Kuwait and Saudi Arabia, which alone accounted for 17 percent of the Asian giant’s oil imports in 2021.

Qatar supplies China with liquefied natural gas — trade that has been bolstered by the global energy crisis resulting from the war in Ukraine.

In November, Qatar announced a 27-year natural gas deal with China worth more than $60 billion, saying it was the longest such agreement to date.

In July 2004, China and the GCC announced the launch of negotiations for a free-trade agreement.

Nearly two decades later, and after nine rounds of talks, the parties have yet to clinch a final deal, despite pledging in January to “accelerate the process”.

Friday’s Gulf-China summit is widely seen as an opportunity to jumpstart the negotiations.

Chinese trade relations are particularly strong with the UAE, which is the largest Middle East market for Chinese products and is a major export hub for Chinese goods, especially to the rest of the Arab world.

Between 2005 and 2022, Chinese companies invested more than $107 billion in GCC states, according to data collected by the American Enterprise Institute.

Investments in the kingdom were valued at around $49.6 billion over the past 17 years, according to the think tank.

For its part, Saudi Arabia was the 12th-largest investor in China in 2019, with nearly $2.3 billion, according to the official Saudi Press Agency.

In 2015, China and the UAE agreed to create a $10 billion joint investment fund. The UAE-China Joint Investment Cooperation Fund is managed by the Abu Dhabi state fund Mubadala and two Chinese state institutions.

As Washington watches closely, the GCC has also turned to China for technology and arms as part of the region’s efforts to diversify its suppliers.

In February, the UAE said it would purchase 12 attack planes from China, a few weeks after threatening to cancel its purchase of F-35s from the United States.

In March, Saudi Arabia and China signed an agreement to jointly develop military drones in the oil-rich kingdom, according to Saudi-owned media.

Eager to curb their dependence on hydrocarbon sales, GCC rulers are also turning to China for technological collaboration.

Since 2019, most GCC telecom firms have signed 5G contracts with Huawei.

The firm is controversial in Europe and the United States over accusations that it is close to China’s military and that its technology could be used for espionage, charges Beijing has denied.

“Note To BJP – It Won An Election, But Lost Two”: AAP’s Raghav Chadha