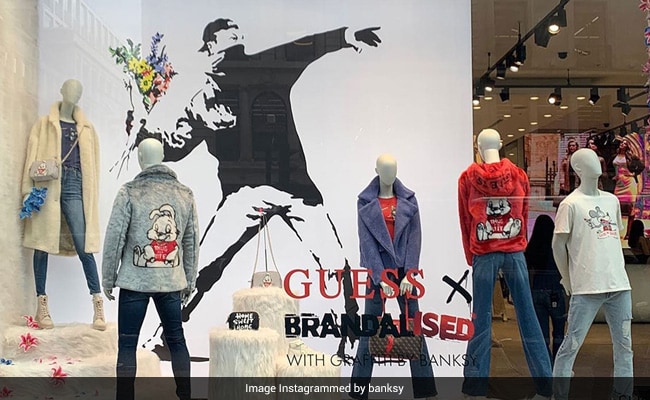 After a Guess clothing store allegedly used one of Banksy’s murals for a window display without permission, the anonymous British street artist posted a strong message on social media. Banksy posted a photo of Guess’ Regent Street store in central London on Instagram, suggesting shoplifters should pay it a visit.

“Attention all shoplifters. Please go to Guess on Regent Street. They’ve helped themselves to my artwork without asking, how can it be wrong for you to do the same to their clothes?” Banksy wrote in an Instagram post on Friday. The post carries an image of the store display, which features a reproduction of the Flower Thrower, one of Banksy’s most iconic murals created in 2003.

According to Guess, this is a new collection “featuring Banksy graffiti,” which was created in collaboration with Brandalised, which licenses designs from graffiti artists. ”For the Fall/Winter 2022 season, Guess is excited to announce a brand new capsule collection, inspired by Banksy’s Graffiti. Created in partnership with Brandalised, an urban graffiti license whose mission is to offer Banksy fans affordable graffiti collectables, this new capsule features contemporary garments for GUESS men, women and children, along with unique accessories,” a statement on the Guess website reads.

After the post by Banksy went viral, Guess closed the Regent Street location to shoppers, covered up the window display and beefed-up security, Reuters reported. According to BBC, copyright lawyer Liz Ward said Guess “appear to have legitimately sourced the Banksy artwork via a third party, namely Brandalised, who say they have rights to commercialise and use Banksy’s artwork on goods”.

Last week, Banksy revealed a mural on a bombed-out building outside Ukraine’s capital. In an Instagram post, the graffiti artist shared a mural depicted a gymnast performing a handstand amid the ruins of a demolished building in the town of Borodyanka northwest of the Ukrainian capital Kyiv.

“Else, Aftab Will Be Born In Every City”: BJP Leader’s Pitch For PM Modi