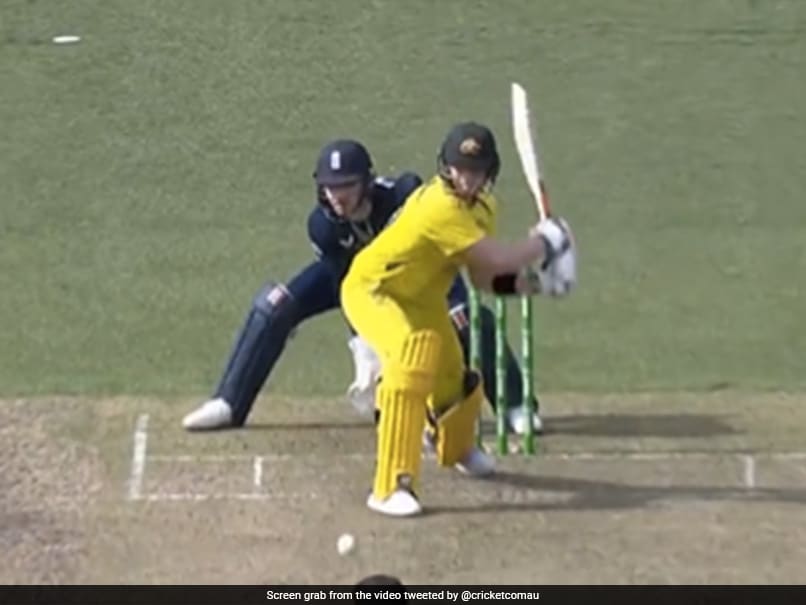 Steve Smith has been in good touch at the ongoing ODI series between Australia and England. The right-handed batter has scored 174 runs across two matches in the series so far. While he remained unbeaten on 80 in the first game, Smith scored 94 runs in the second game. Runs have been coming from his bat and his confidence is also showing. The player, who majorly relies on text-book shots, surprised the crowd at the Sydney Cricket Ground on Saturday with an attempted switch-hit.

It was a free hit on the 32nd over of the Australian innings. Adil Rashid bowled a no-ball to Mitchell Marsh. The delivery also saw Smith and Marsh take a single. This saw Smith getting the strike for the free-hit delivery.

In an attempt to try something new, Smith went for a switch hit. However, Rashid smartly bowled a leg spin out that was out the reach of Smith but within the playing area to make it a dot ball.

“Steve Smith trying something new on the free hit. How’s the reaction from him #AUSvENG,” wrote cricket.com.au while sharing the video on Twitter.

Steve Smith trying something new on the free hit

Talking about the game, Australia defeated England by 72 runs to gain an unassailable 2-0 lead in the three-match ODI series. Mitchell Starc returned figures of 4 for 47 and Adam Zampa also starred with a 4 for 45 as Australia bundled out England for 208 runs in 38.5 overs.

It was Steven Smith‘s 94 and fifties from Marnus Labuschagne (58) and Mitchell Marsh (50) that had propelled Australia to a total of 280 for 8 at the SCG despite Adil Rashid’s 3 for 57.

For England, Sam Billings (71) and James Vince (60) showed good fight but they lacked support from other batters.

Topics mentioned in this article