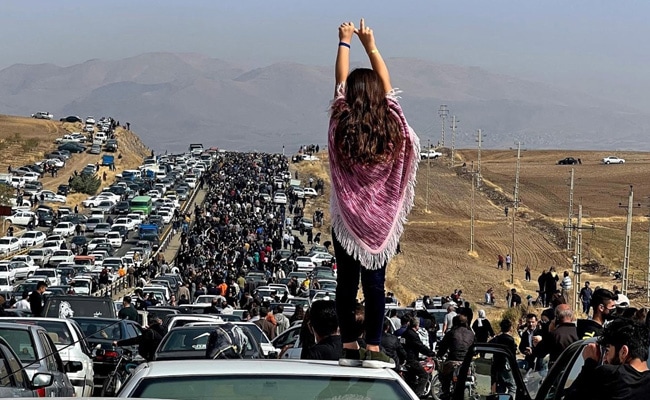 Iran has been shaken by nationwide protests since the death of a 22-year-old in police custody.

The Iran football team has been at the eye of the storm since over participation in the FIFA World Cup amid anti-government protests gripping the country. The squad, known as Team Melli, was today criticised by Iranian activist Masih Alinejad, who said that the football team doesn’t represent the people of Iran, but the government.

“Iran is the only country in the World Cup that its people want their national football team to lose since the team doesn’t represent the people but the regime,” Ms Alinejad posted on Twitter.

Iran is the only country in the World Cup that its people want their national football team to lose since the team doesn’t represent the people but the regime.We want our people to win in the streets where protesters are getting killed for demanding freedom & dignity.#MahsaAminipic.twitter.com/1nl91fghhK

Iran has been shaken by two months of nationwide protests since the death of 22-year-old Mahsa Amini in morality police custody on September 16. The crackdown since Amini’s death has left nearly 400 people dead, according to the Oslo-based group Iran Human Rights.

Ms Alinejad is the international face and voice of angry women in Iran who are being beaten, jailed, and even killed for throwing off their hijab and showing their hair. Yesterday, a prominent actor was arrested after she removed her headscarf in public, in an apparent act of defiance.

Masih Alinejad, sharing a powerful montage of the protests, said that she wants Iranian people to win in the streets where they are being killed for demanding freedom and dignity.

Her tweet comes hours after the Iran football team refused to sing the national anthem ahead of their opening match against England as a mark of protest.

The Iranian players stood impassively and grim-faced as their anthem rang out around the Khalifa International Stadium in Doha. The gesture is widely seen as a pledge of support for the anti-government protests.

The players have been caught between Iranian officials who want them to show loyalty to Tehran’s embattled Islamic establishment and the team’s mainly young fans who have urged the footballers to show solidarity with the protests over Mahsa Amini.

Historically Team Melli has been celebrated by Iranians across political divides for triumphing against much stronger international sides and unifying the country.

Past appearances at World Cup tournaments have triggered huge street celebrations in Iran, often coinciding with moments of geopolitical tension or crisis, such as their 1998 World Cup group stage win against the US.