The assembly elections in Gujarat are all about deciding the fate of the state for the next 25 years, Prime Minister Narendra Modi said on Thursday, as he targeted the Congress and Aam Aadmi Party (AAP) over a range of issues in the poll-bound state.

Modi also said that though several developmental works have been carried out so far by the ruling Bharatiya Janata Party (BJP) in the state and at the Centre, the time has come to take a “giant leap”.

The Prime Minister addressed four rallies in Palanpur, Dehgam, Modasa and Bavla during the day, to endorse BJP candidates in the elections scheduled to be held in two phases on December 1 and 5, where the party is looking for a seventh straight victory. The results will be announced on December 8. 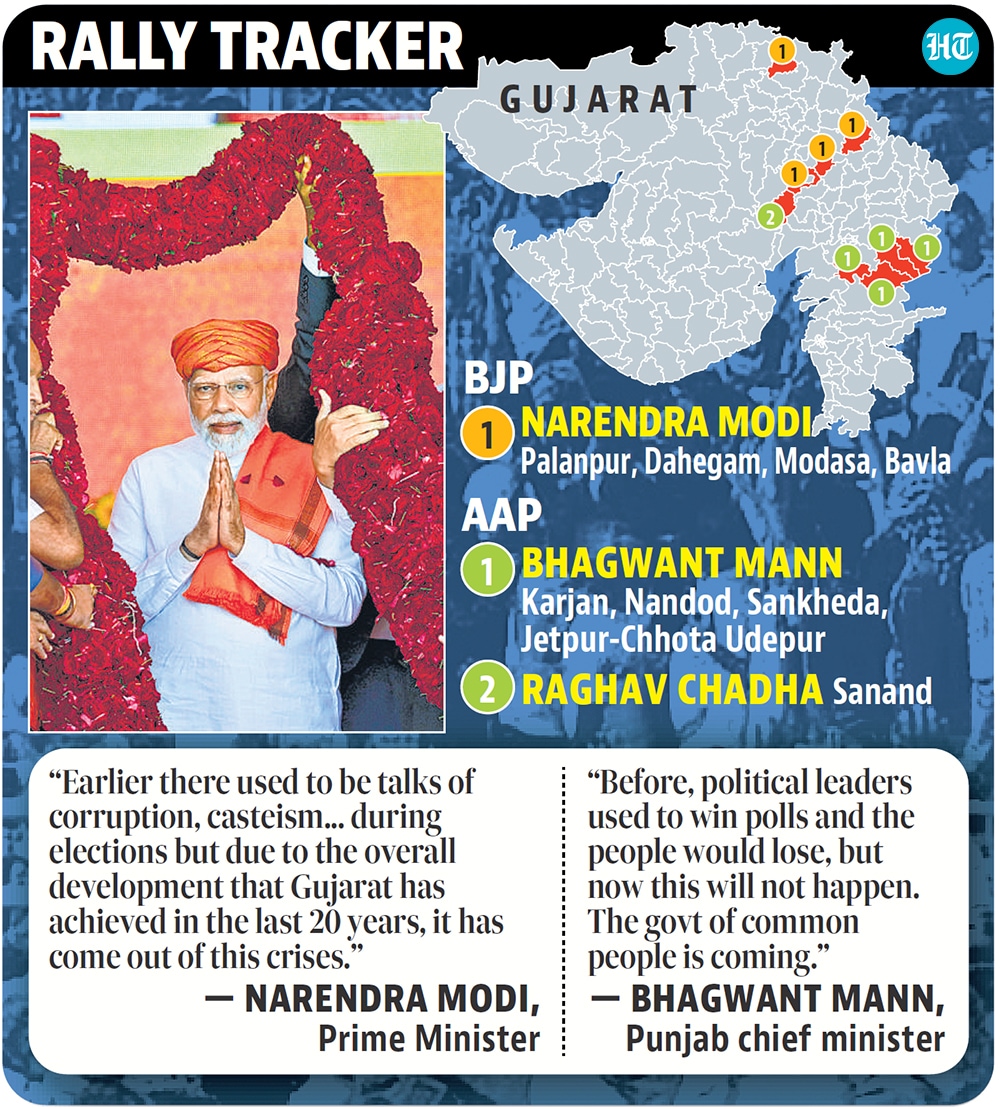 “Time has come to take a giant leap now. And, I need your support to form a strong government in Gujarat. You don’t have to tell me your issues because I grew up here and I very well understand those issues…,” he added.

Modi stressed on the need to work in a manner to ensure the state is ahead in the standards of rich countries of the world.

“Earlier, there was a time when there was talk of corruption, casteism, nepotism, road-electricity-water-health issues in elections but due to the overall development that Gujarat has achieved in the last 20 years, Gujarat has come out of such crises. 20 to 25 years ago, works for the development of basic facilities in Gujarat were done, but today the state is known as a leading state in the country,” he said.

Addressing an election rally in Modasa town of Aravalli district in north Gujarat, Modi said it was time to generate income from electricity instead of getting it for free, in an apparent move to counter the Aam Aadmi Party and the Congress over their poll promise of free electricity in the state.

“Considering that Gujarat produces 10 times as much solar power and five times as much wind power as the rest of the country combined, only Modi has the power to encourage people to make money by selling electricity,” he said.

“When it comes to solar rooftop installations, Gujarat is taking the lead. You must have seen how the entire Modhera village (in Mehsana district) is now running on rooftop solar power. They are using electricity as per their need and sell excess power (to the government). I want to replicate this system across Gujarat,” he added.

The BJP government in Gujarat has transformed the education sector in the state and made it more scientific and modern, Modi said, as he touched upon an election issue which is being aggressively pushed by AAP.

“Nearly 20 to 25 years back, Gujarat’s budget allocation for education was just ₹1,600 crore. Today, it stands at ₹33,000 crore, more than the total budget outlay of many states. This is the progress we have made,” he told a rally in Dehgam.

In Bavla, the Prime Minister accused the Congress of neglecting the values of Mahatma Gandhi. “Mahatma Gandhi used to say that the soul of India resides in its villages. But Congress leaders never cared to follow such Gandhian values. They actually crushed that soul. Villages remained neglected and their true potential was never realised,” he said.

Hitting back, Congress spokesperson Alok Sharma said: “Even after several years of the BJP’s regime in Gujarat, PM Modi is taking the support of the Congress to impress his audience in his election speeches. First his slogan was ‘I made Gujarat’, now it has changed into ‘you will develop Gujarat’. This shows his outburst. The people here are looking for a change.”