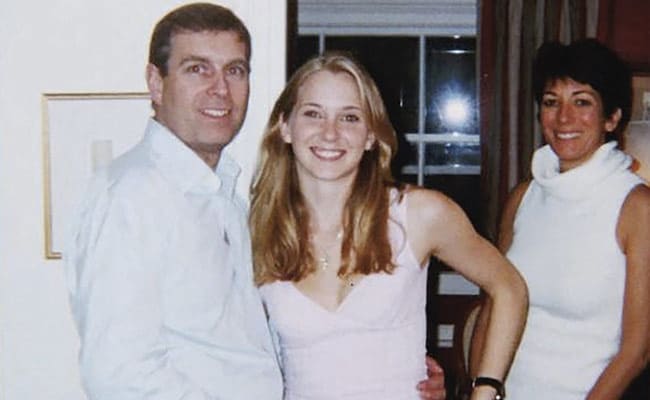 The photo has been used as a crucial claim against Prince Andrew. (AFP File)

Ghislaine Maxwell, the socialite jailed for helping disgraced financier Jeffrey Epstein sexually abuse girl, has said that a photograph of Prince Andrew with his sexual abuse accuser Virginia Giuffre is “fake”, according to The Guardian. Maxwell spoke about the 2001 photograph in a video interview from prison, where she is serving her 20-year sentence for helping Epstein, who died in 2019, the outlet further said. The 61-year-old was convicted for sex trafficking and grooming girls for Epstein, who was Prince Andrew’s friend.

“I don’t believe it’s real for a second. It’s a fake… there’s never been an original and further there is no photograph. I’ve only ever seen a photocopy of it,” Maxwell was quoted as saying by The Guardian.

The interview was conducted in August and its clips have been released by TalkTV, which will broadcast it on Jeremy Kyle Live show on Monday.

“I don’t believe it’s real for a second.”

Giuffre has sued Prince Andrew in the US court, claiming that she was trafficked by Epstein and Maxwell to him. She has also claimed that they had sex in London when she was 17 and a minor under US law.

Prince Andrew has denied these allegations and continues to do so. He has not been criminally charged, but stepped back from royal duties. Prince Andrew was also stripped of his military titles after being publicly criticised over a $16.3 million settlement.

He had paid the money to settle a civil sexual assault case with Ms Giuffre.

The photo that has been used as a crucial claim against Andrew shows him with his arm around Giuffre’s waist and Maxwell standing next to them.

In an interview with the BBC in 2019, Andrew questioned the photo’s authenticity, claiming that he had never met Giuffre. Andrew also claimed that the picture could not have been taken in London as he was in his travelling clothes.